It’s not all rugby at the Stadium, in fact Wellington’s Phoenix football team played the Brisbane Roar under the roof shortly after opening day in August 2011, and both sides praised the playing surface and the crowd.

The Phoenix returned in December to play the Roar again, then they beat Melbourne Heart here in March 2013, and in November 2015 local team Southern United beat them by a single goal scored in the eighth minute of play.

British Premier League team Newcastle United started their 2014/15 season with a friendly match against Sydney FC in July 2014 at the Stadium, beating Sydney 4 - nil. Spectators were entranced as the Magpies, so lean, cool and relaxed in their grey and black away colours, effortlessly dispatched the opposition.

With Stadium fans warmed up to football under the roof, the FIFA U-20 World Cup 2015 pool games held here were very popular. Dunedin was lucky to score what was called ‘the group of death’ – Uruguay, Mexico, Serbia and Mali – all highly competitive teams. The teams’ presence was celebrated in town with welcomes from the Kings and Queens kapa haka group, a pipe band, and gifts of pounamu pendants. They trained at various venues around town, giving local fans many opportunities to see them in action. Their colourful supporters were in town as well and of course the world’s sporting media because these young and talented players will be the world’s top footballers in the future. Seven games were played at the Stadium, then Serbia went on to win the final against Brazil in Auckland, and become World Cup champions, a thrill for local fans who had met them here. The whole event was a fantastic boost for local football. 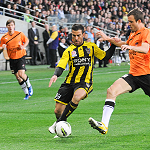