New Zealand Cricket has today announced the 2018/19 season’s fixtures and Dunedin’s University of Otago Oval will play host to the BLACKCAPS when they take on Bangladesh in a one dayer on Wednesday 20 February 2019. A sell-out crowd is expected and it’s hoped the weather will play its part in the occasion as it did at this year’s matches.

Dunedin Venues CEO Terry Davies said he was excited for his team to again be a part of delivering international cricket to southern fans. “Everyone had a great time at the matches earlier this year and we expect next February’s one day international will be another fantastic day out.”

Mike Coggan, CEO at Otago Cricket echoed the positive reaction to the announcement. “Cricket is certainly alive and kicking across Otago and Southland and to see a fourth International fixture scheduled for Dunedin inside two years is testimony to the great work happening across our region”.

Dunedin’s Mayor Dave Cull was also pleased to hear the news. “With its grass embankments providing ideal vantage points, the University of Otago Oval has quickly established itself as one of New Zealand’s premier grounds for cricket spectators. I thoroughly enjoyed the last one day international here, which produced a thrilling nearly 700 runs scored. So we’re looking forward to local and visiting fans being similarly entertained when the Black Caps and Bangladesh visit in February.”

David White, CEO of NZ Cricket said it was a good result for the south. “It’s always pleasing to see international cricket played in New Zealand’s southern-most venue, both for the wonderful aesthetics of the University of Otago Oval, and also to ensure that cricket-lovers in the lower South Island have the opportunity to see the BLACKCAPS in action.”

Details of when tickets go on sale will be released at a later date but it is recommended getting annual leave forms submitted now. 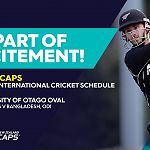