It was opened just over five years ago, but Forsyth Barr Stadium remains in top condition heading into Saturday's Test between the All Blacks and Wales.

The field remains cutting edge five years after being installed, with synthetic turf used to reinforce the grass, meaning it won't need to be replaced for another five to 10 years.

Coryn Huddy, the stadium's operations chief, says the fully-enclosed arena will still have all its standout qualities on display this weekend despite the time of year.

"In terms of this time of year we're still getting the desired light that penetrates through the roof - that helps us out.

"The guys have learned a lot along the way, in small subtle changes, but it's all about improving the surface."

Not only is there a mix of synthetic and natural grass in the turf, but there's also six sensors under the field, relaying all sorts of information back to the groundstaff, including moisture content.

Add to that a homemade lighting panels system to assist with grass growth and suddenly there’s a world-class pitch with state-of-the-art technology all under one closed roof.

Wembley and Millennium Stadium in the UK have now followed the Otago stadium's example with their own pitches.

Check out the One News video report! 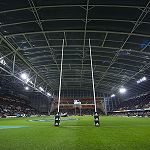