All Blacks hold off Springboks

In case the All Blacks had forgotten what real test rugby was all about, South Africa provided a timely reminder tonight in a 21-11 win to the home team.

Real test rugby being the kind that is relentless, brutal, passionate and the outcome in doubt for most of the game.

The Springboks have just the one trick - but its a good trick and it took all of the All Blacks' patience, courage, composure, belief and superior fitness to see them through.

It also helped that Dean Greyling had a moment of madness in trying to 'clean out' Richie McCaw - with his head - and took 10 minutes in the bin just as the All Blacks were gaining the ascendancy that had been beyond them up until them.

Just before that Aaron Smith had spied a gap round the side of a ruck, skipped through it and run Zane Kirchner to earn some personal redemption and put the All Blacks 15-8 ahead.

It had been a long slog to get there. The game wouldn't break open as South Africa had kept a giant mitt on it - like the cartoon cat clutching the tail of the flailing mouse. Big men, all of them, they made their presence felt.

It was physical, it was direct and it was unforgiving. The Boks, when they had the ball, were in no hurry to do much with it. It disappeared for long periods at a time, apparently in the midst of a green wedge that would trundle forward, sapping the All Blacks.

When they didn't have it, they tackled hard and were suspiciously good at slowing the ball at the breakdown. The All Blacks couldn't build momentum, couldn't inject the pace they wanted and the longer the game stayed an arm wrestle, the longer the Boks were a chance.

To eventually take control of the test was a serious feat. Lesser sides might have wilted, especially after Bryan Habana had scored a ludicrously good try to put his side in front after 50 minutes.

But not this lot - Smith injected some tempo, McCaw started charging, Ma'a Nonu fired up the middle, Brodie Retallick made the clean outs and Israel Dagg boomed the ball long.

And all the time there was this hope that at any given stage, the All Blacks would conjure something as they had in the first half.

Mismatches are what coaches spend hours hoping to be able to manipulate - leave nimble backs running against not so nimble forwards.

There were were precious few times when the game actually broke open for any such thing to eventuate, and when half a chance had presented itself after 20 minutes, the problem for the All Blacks was that their not so nimble forwards were the ball carriers.

There didn't appear to be much on, then, when Sam Whitelock ploughed into Ruan Pienaar. But that was until the big lock flipped a class pass out the back door.

Presumably taking the approach that anything a dopey lock can do, a No 8 can do better, Kieran Read threw an even better offload to Israel Dagg and that was that - the fullback was over and right there was the difference between the two sides.

The South Africans were a little perplexed at that stage. They had enjoyed the better of the physical exchanges. They had owned a majority share in the collisions and their raw power was most evident when they took their time and launched endless rolling mauls.

But rugby isn't just about the beast - there has to be a bit of beauty, too and the Boks couldn't really make their brutality count because they simply lacked the skill to do so. It was impossible to imagine any of their forwards being able to emulate Whitelock and Read; actually, it was pretty tough to imagine any of their backs could do it, either.

Criticised for being conservative in his selections and trying to impose the blueprint of the Bulls on the Springboks, it was easy to see why coach Heyneke Meyer is heading the way he is.

Pass and run rugby is beyond his side - with the honourable exception of Bryan Habana, whose try was classic opportunism and electric execution - so why bother with it?

When they rumbled tight, hit the big men on the charge and then used Pienaar, Morne Steyn and Frans Steyn to launch the ball quite indecently high, they put pressure on the All Blacks.

Simple rugby works for them in that it keeps them in the contest, makes them hard to beat. It also allowed them to slow the rhythm of the game; to keep it adante rather than allegro.

The last thing they wanted was for the game to be fast and loose and for the All Blacks to be given a platform from which they could display their superior fitness and skills. 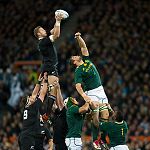