👑 JUST ANNOUNCED: Queen + Adam Lambert - The Rhapsody Tour is heading to Dunedin for the FIRST TIME EVER in February 2020!

The soaring success of the film Bohemian Rhapsody, the highest grossing music biopic of all time, has proven that the love for Queen remains as strong as ever.

We are thrilled with the news that Queen original band members Brian May and Roger Taylor are teaming up once more with long-time front-man Adam Lambert and will play in Dunedin for the first time ever on their New Zealand tour, in a show under the roof on Monday 10 February 2020.

Dunedin Venues CEO Terry Davies was beaming at the announcement. “It is an incredible result to have Queen and Adam Lambert featuring under the roof in February next year. The city is going to be pumping with all that will be on offer.”

GENERAL PUBLIC ON SALE:
🎟 Wednesday, 17 April at 10am from Ticketmaster New Zealand.

Please note, Ticketmaster is the only authorised ticket seller for the show at Forsyth Barr Stadium. 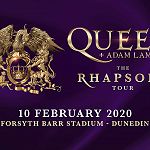