Dunedin’s Kartsport contingent will be one of the key support attractions at the opening round of the Demon Energy D1NZ National Drifting Championship at Forsyth Barr Stadium.

The Kartsport racers will join an already packed lineup of motor racing action, supporting the D1NZ Pro and Pro-Sport Series’, with the Stadium SuperMoto Cup and Silver Fern Rally alongside.

“It’s really good, we’re looking forward to it,” said Kartsport Dunedin committee member Les Campbell. “We’ve got kids ranging from nine-years-old to 13-years-old racing, and they’re absolutely buzzing about trying to get out on the concrete surface.”

An added challenge – not only for the rally, drifting, and motard racers – will be the slippery concrete surface. A brief blast around the circuit on Wednesday afternoon showed the slick nature of the track.

“We normally race on asphalt, so there’s totally different grip levels. So these are some very interesting times.”

“It’s a lot different. There’ll be a lot more drifting especially with the concrete not having a lot of grip. It’s very interesting to drive.”

Two classes of racing will compete on the oval-layout, with the adult Rotax Max 125 and Junior Vortex Mini Rok.

Campbell’s daughter Callissa said she was looking forward to being part of the action, and watching the headliner D1NZ National Drifting Championship.

“Once the grip goes down then we might actually be able to pass and get faster,” said Callissa. “I’m really looking forward to the drifting. Hopefully not me!”

With gates opening for spectators Friday from 12pm, Campbell said he’s keen to put on a show and be a part of a Southern Hemisphere motor racing first.

The first round of the Demon Energy D1NZ National Drifting Championship at Dunedin’s Forsyth Barr Stadium takes place over December 2-3. The event is supported by the Silver Fern Rally, Stadium Supermoto Cup, and Kartsport Dunedin.

For more information about round one of the Demon Energy D1NZ National Drifting Championshp, visit D1NZ.com 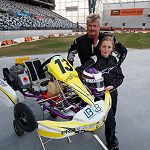