Learning the Tricks of the Turf

A lot of work goes into keeping the turf in perfect condition for games. Kurt McLean was lucky enough to go behind the scenes for 20 days to learn all about turf management at Forsyth Barr Stadium.

Teenagers and phones, teenagers and computers, how about teenagers and lawns?They’re not a natural fit in most households where mowing the lawn is seen as a chore, but for 17 year old Kurt McLean, after 20 days on the job with the grounds staff at Forsyth Barr Stadium, a career in turf management is very attractive.

Kurt is a Year 13 student at Taieri College in Mosgiel, a keen rugby player, and his family have season’s passes to Highlanders’ games at the Stadium. He liked the look of what the grounds staff did and asked his Gateway Programme teacher Sue Craigie if she could arrange for him to work there one day a week. The placement was a success and now Kurt is keen to find a job working with turf before starting an apprenticeship in Turf Management through the Otago Polytechnic.

As Kurt discovered, a lot of work goes into keeping the turf in perfect condition for games. “After a game you can see where the players have been running and it’s all dug up. They put more sand and grass seed into it and repeat the process. A machine spreads it out so that it goes into the ground and mixes with the mud. It takes about two hours to do that after a game. Then they roll out the lights which are on wheels and put them on the really bad areas, and the heat helps the grass to grow. It’s not the whole field that’s ripped up, just in the centre where they put the big logo, where it gets lots of traffic.”

Forsyth Barr Stadium is the first in the world to have a permanent roof overhead and a natural turf surface. Rain never falls on it so mud isn’t a huge problem, but the sun comes through the roof, making it the biggest glasshouse in the country. It makes a pleasant work environment, especially in the winter.

Kurt, who Sue describes as “a bit of a hands on outside person”, helped out with preparing the playing surface for games including painting the lines, vehicle maintenance, mowing the grass outside the Stadium, and also mowing the edges of the ground. He loved the work and found it very satisfying to see the progress made.

Taieri College has 30 students taking part in the Gateway Programme in 2014. They undergo a strict selection process in Year 12 which includes an application form, interview and scrutiny of their school attendance record. As Sue says “We’re looking for students who feel ready for work, show a bit of initiative and a bit of confidence in themselves, present themselves well and can answer questions with a decent sentence. They’re going to be ambassadors for the school so we want to make sure they will make the school look good as well. I wish I had more like Kurt!”

Students work one day a week for 20 weeks in a variety of occupations. This year they include building, engineering, the Fire Service, retail, electrical, computing and turf. As Sue says “It’s a way of finding out if a career is right for them. This is one of the better years, with 11 students out of the 30 leaving school already, 8 to take up apprenticeships and 3 into full time jobs.” Many also find holiday work with their employers, and the contacts they make are very helpful when looking for jobs when they leave school. Kurt’s dedication and effort was recognised at his school prize giving where he was awarded prizes for Trades Academy Workshop and Gateway and Merit for Sports Leadership.

Kurt is optimistic that his interest in turf, experience at a world class stadium, and good work ethic will help him find a job in turf management at one of the many golf courses in the Dunedin area or working for a private company maintaining sports grounds. In the meantime he’s finishing his studies at school and mowing the lawn at home. 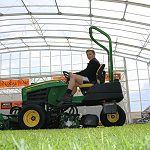