The final got off to an exciting start with the Eagles scoring in the opening minutes through hooker Sam Johnstone.

The Tigers struck back 15 minutes into the first half with a try of their own through captain Shane Unahi.

After grinding their way towards the Eagles' tryline, the Tigers spread to the left and the Eagles stood no chance of stopping Unahi just 5m from the line and he duly crossed over.

The Tigers were hot on attack soon after scoring that try when hooker Joseph Wrathall ran into a tough tackle, resulting in a serious injury.

He was stretchered off the field and went to hospital with two fractured bones in his leg, leaving the Tigers without one of their key playmakers for the remainder of the game.

The Eagles added to the Tigers' woes by scoring successive tries: Hyrum Martin broke through several tackles and surged towards the tryline before offloading to Tama Apineru, who scored, and Sam Johnstone crossed over again for his second try.

Kieran Fitzgerald successfully converted one of the tries, adding a further two points and giving the Eagles a 14-4 lead.

With the halftime break approaching, Tigers playmaker Taua Piri kept his side in the fight by pushing over the tryline out of dummy half to score a vital try. Apuula converted the try and the score was then 14-10 as the whistle blew for halftime.

Early in the second half, it was Piri again who stood up for the Tigers, setting up back-to-back tries.

The first try was due to an elusive run from Piri before he offloaded to prop Koben Katipa, who found his way to the tryline to level the scores.

For the second, Piri created some space and got the ball to Hagan Free, who crossed over for his side.

One conversion attempt was successful and the Tigers led 20-14.

In the next 10 minutes, the Tigers added two points from a penalty and four points from another try, when Shane Unahi broke through the line and spread the ball to Apii Taia, who scored in the corner.

The Eagles' hopes of winning the final were slipping away, and when Unahi scored another try, which was duly converted, the Tigers led 32-14.

Suafai Tuuau gave the Eagles some hope by scoring a try late in the second half to bring the score to 32-18, but that was the last of the scoring for either side and the final came to an end.

The Eagles will be disappointed to have fallen short in the final for the second season in a row but should be proud of their efforts throughout the season and during the match itself.

The Tigers fought hard throughout the competition to keep their spot at the top of the table, and winning the final is a fitting reward for their efforts in 2016. 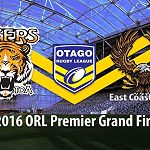 We are very excited that the All Blacks will play Scotland at Forsyth Barr Stadium on 18 July 2020.