The service began at 7am and was followed by speeches from Mayor Dave Cull and Chairman of the Carisbrook Stadium Trust, Malcolm Farry, before it was officially opened by the Prime Minister unveiling a plaque. The plaque reads, ‘My success is not the success of one, but because of the success of many.’

The formalities were followed by entertainment that included the City of Dunedin choir, City of Dunedin Pipeband, John McGlashan College Pipeband and a local kapa haka group. The lead vocalists were local singers Kawiti Waetford and Janine Weatherly.

David Davies, CEO, Dunedin Venues, which will manage Forsyth Barr Stadium, commented, “Today marks a new era for the city. On behalf of everyone, this is a hugely exciting day. We acknowledge the huge efforts of others who have got us to this point. While we’ve reached the end of the beginning, what remains will be a challenge – one we accept with enthusiasm and we sincerely hope the Stadium makes everyone proud.”

Dave Cull, Dunedin City Mayor, comments “The technical challenges have been overwhelmingly met. The project management team has done a superb job to bring such a ground-breaking project to completion. Dunedin now has a roofed stadium that is unique: a first class entertainment venue offering a magnificent spectator experience that is the envy of the rest of the country and which is also attracting international interest even before it has begun operating. That is well worth celebrating.”

Sir Eion Edgar, Chairman of Forsyth Barr commented, “Forsyth Barr Stadium embodies much of what our city represents, innovation, leadership, commitment and community. And it has become an expression of confidence in the future – not just our future but New Zealand as a whole.”

And CST chairman Malcolm Farry summed up the mood of satisfaction by reminding the crowd that the Trust was to-day “delivering on the promise it made five years ago – bringing the project in on time and on budget!”

The ceremony was to be followed, at 12.30 pm, by the first rugby game on the new Forsyth Barr Stadium turf, between Knox and Selwyn University Colleges. Entrance to the game is via a gold coin donation and the public will be seated in the North Stand with access through Gate D. 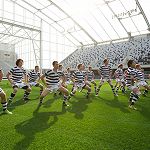 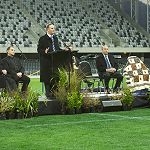