We’re expecting dynamic and flamboyant football at the Stadium when the FIFA U-20 World Cup hits town from 31 May to 10 June.

Dunedin has scored a line-up of very competitive teams – Mexico, Uruguay, Mali and Serbia – already dubbed ‘the group of death’ because the battles between them will be so intense and the stakes so high. Add to the mix a pitch in perfect condition because it’s immune from the weather, guaranteed dry conditions for players and fans, and that intoxicating roar from the crowd as the sound bounces around the roofed Stadium. It’s a formula for international sport at its very best.

Dunedin’s FIFA Venue General Manager and former All White, Mike McGarry says ‘Dunedin’s lucky enough to have what I think is the strongest group. Mexico is one of the favourites to do really well, Uruguay was in the final last time, Mali is one of only four countries in the whole of Africa to qualify, and Serbia is one of only seven countries from all of Europe. It’s a very tough competition to get here and now that they’re here they have to battle it out for two places to get through to the knockout stage.’

Local fans will also have the opportunity to see another two extremely competitive teams when Columbia and Portugal leave their base in Hamilton to play a match at the Stadium on 6 June. Mali and Uruguay will make the trip to Hamilton to play their game at the Waikato Stadium on the same day. Then on 10 June a round of 16 match will be played here. It’s a knockout game which could go to extra time and a penalty shoot-out.

Spectators at the group matches will see four teams in action each day as two matches will be played at the venue with only a short break in between. The games consist of 45 minutes each way, and when the first one is over there will be a break of only 15 minutes before the teams for the next game come onto the pitch to warm up. Running double headers like this means there’s always something for the spectators to watch.

Mike makes the point that the young players in New Zealand for the tournament are the superstars of the future. Most are already signed up with clubs and Giovanni Simeone who is playing for Argentina was recently sold for NZ$64 million.

‘The good thing about the Under 20s is that they play with a bit more flamboyance and there’s still pressure on to win but they’re young men and they want to show off their skills so the games will be more open. These guys will try things and they’ll be out there trying to show off. They’re on the world stage. There will be scouts here from all over the world looking at them. Even though they’re signed on with clubs, if they’re good enough, another club may be willing to buy them.’

The matches at the Stadium aren’t the only opportunity for local fans to see the players in action. Four training grounds are being prepared – two at Logan Park, one at the University Oval and one at Mosgiel – and members of the public will be able to watch the players train there. The four teams will rotate around the different training venues. Details of which team is training where will be announced online.

The training pitches and the Stadium have brand new state of the art goals built in England courtesy of FIFA. They have a special feature which prevents the ball from rolling out once it’s inside the goal. The five sets of goals will remain in Dunedin after the tournament, part of FIFA’s ‘legacy’ to each of the seven cities hosting the tournament.

The bulk of this legacy in Dunedin will be a ‘Home of Football’ featuring an all-weather playing surface and costing a large sum of money. The site for this facility hasn’t been chosen yet but it’s all part of FIFA’s policy of supporting the improvement of facilities for football in the areas hosting tournaments. This new playing field will be managed by Football South and it will provide a major boost to local football.

FIFA has very detailed requirements for every aspect of the venues it hires as Mike explains. ‘The grass will be mowed to FIFA regulations – 28 mm in length – with stripes which are mowed then rolled. The training pitches have to be mowed to the same length as the Stadium because each team must have training conditions identical to the match venue. The Stadium’s facilities are going to be fantastic. The Highlanders had their last game there on 1 May and there’s a whole month of preparing the pitch to get it in the best possible nick.’

The publicity from the tournament will be priceless. Before each local match is broadcast live on Sky there will be a short promotion about Dunedin beamed out to 200 million fans worldwide. 150 – 200 international media people will be in town and they will visit local tourist attractions. Media stories about Dunedin as a tourist destination will flow.

On a more personal level, 225 local volunteers will be helping out with all kinds of tasks associated with such a huge influx of visitors into the city. They will be showcasing the friendliness and hospitality which Dunedin is known for.

10 June Round of 16 featuring the winner of the group based in Dunedin: Serbia 2-1 Hungary 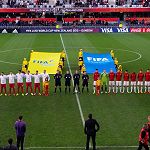