The Dunedin Craft Beer & Food Festival sells out with two months to go!

The Dunedin Craft Beer & Food Festival has become a staple on the annual events calendar for the Otago region. After selling out two days prior to the event in 2016, tickets have now been snapped up over two months in advance of this year’s event showing the popularity and demand the festival holds.

“We’ve been a little caught off guard with how quickly tickets have sold out, although we’re absolutely stoked with the result. There will be a few tweaks to our marketing plan, but we now have the opportunity to share more vendor stories and concentrate on crafting the ultimate experience for punters on the day. It’s really exciting,” says Marketing Manager, Katrina McLennan.

This year will be the festival’s fifth edition and continues its legacy of championing both local food producers and brewing legends, as well as those from further afield. Focusing on a true appreciation of quality ingredients and expertise, the festival celebrates both craft beer (one of the fastest growing industries in New Zealand) and the flourishing fine food and beverage scene we’re so privileged to have on our back doorstep. With over 90 stalls setting up on the pitch of Forsyth Barr Stadium there will be something for everyone; some good old southern charm and enough top-quality food and drink to choke a goat.

“We’ve got vendors coming from the far north, right down to the tip of the south. The representation we have travelling from across the country is insane, and this is the first year we haven’t been able to find space for all the stallholders who applied which has been really hard,” says Event Coordinator, Luke Matsopoulos. “In saying that, we have made sure that we have a great selection of newcomers and boutique brewers, as well as the established industry giants.”

Attendees will get the chance to sample the 2017 Official Festival Brew, Saul’s Milk Stout, produced by the winner of the 2016 Homebrew Competition, Saul Ross. This sweet, dark and moreish beer will be brewed on commercial equipment by Saul and the team at Emerson’s Brewery in the lead up to the festival. Entries are still open for this year’s competition, where homebrew enthusiasts can vie for the chance to craft next year’s official brew. Previous winning entries have included a Raspberry Wheat Beer, a Bourbon Oaked Porter and a Kettle Soured Gose, with many other brilliant brews and incredible talent being discovered along the way.

In keeping with the theme of ‘incredible talent’, the delicious kai will be complemented by some fantastic kiwi tunes. Headlining the festival this year is legend and musical icon, Dave Dobbyn. Joining him on stage are multi-award winning and hit single producing Goodshirt, who are returning to Dunedin for the first time in 15 years, and relative newcomers and radio favourites, Nomad. Hauraki Breakfast Show hosts, Matt Heath and Jeremy Wells will be your MC’s, providing plenty of banter and top quality admin. All of this will be accompanied by the usual contingent of games, seminars and entertainment, ensuring the ultimate friends-family-fiends day out. 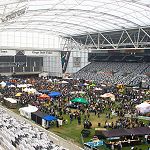